A Complete System of Poppet Magic

Sympathetic magic is the practice of using objects and/or actions resembling an event or person over which magical influence is sought. A common form of sympathetic magic intended to impact a particular person is to use doll or “poppet” to symbolize the intended (person or animal as the case may be). The most common fictional representation of poppet magic is to cause harm to the targeted person, by placing pins in various body parts for example. A poppet used in that manner tends to be referred to as a voodoo doll  in common parlance, but such depictions are usually culturally and religiously inaccurate and tend to promote negative stereotypes about African Traditional Religion. Suffice it to say that Voodoo (Vodou, Vodun, etc.) is a comprehensive spiritual orientation (religion) that involves working with a particular pantheon of spirits. The specific spirits involved are what makes a practice Voodou, not the use of a poppet.

To addition, poppet/effigy magic has a long history in many cultures, and is currently practiced within and without various religious contexts, depending on the operator’s orientation. Poppet magic may be used for virtually any person-oriented goal (healing, love, business success, prophetic dreams, etc.). As is true of any magic practice, the tools and techniques themselves are neutral. Effects necessarily follow the operator’s intentions.

Any poppet magic procedure has three functional steps: 1) magically identify the poppet with the target person, 2) enact a magical intervention on the poppet, and finally, 3) disassociate the poppet and person after a set period, or when the magic is deemed to have run its course. That instruction alone is enough to develop personally meaningful procedures. What follows represents one among many possibilities for how poppet magic might be implemented.

Poppets can be made of just about anything that can be formed into human (or animal) shape. Common materials include corn husks or raffa, twigs, paper or cardboard, wax, and clay. One of the most common forms is a stuffed cloth doll, wherein the magical interventions will take the form of strategically-placed pins in select body parts. That practice can be conceptualized as magical acupuncture by proxy (more on that below). A small stuffed poppet can either be made from scratch or a blank muslin doll can be purchased at most craft stores.

To make a simple poppet from scratch, fold a suitable piece of fabric in half and draw the following shape (or something similar) onto it. You can make the poppet as big or small as you like. About 5 inches high is common. 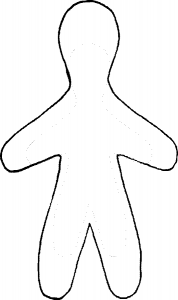 Cut out the shape. Be careful to keep the two pieces of fabric aligned while stitching the two pieces together around the outer edge. Leave an inch-long opening around the neck-arm area. Turn the poppet inside-out, then stuff it with cotton or other material. If you plan to add personal items belonging to the intended (optional), don’t stitch the opening at this time. Otherwise, finish by stitching up the opening and the poppet is ready for the identification process.

In magical jargon, a fetish is an object presumed to be intimately associated with a specific spiritual force. The fetish is therefore respected and treated in all ways as if it were the spiritual force itself, made manifest. A poppet can be understood as a special type of fetish, one that that is intimately associated with the living spirit of a specific person. In theory, if an association between a poppet and the person it represents is real, then acts performed on the poppet will necessarily affect the person, first and foremost on a spiritual (or magical) level. Outward effects then naturally follow.

From the fetish point of view, the identification process is a matter of spiritual possession, wherein something of the intended person’s spirit comes to inhabit the poppet for a time. There are other ways to think about it though. An astral perspective stems from the idea is that everything in the physical world has an astral counterpart. Poppet identification from the astral perspective amounts to establishing a link between the poppet and the intended on the astral plane, creating a tether or channel between them.  From a general magical perspective, the association between the poppet and the intended is imposed by an act of will during a magic operation. There are other possibilities, and none are necessarily mutually exclusive. They can all be correct in some sense.

Most importantly, different people can have different ideas about how the process might work while all claim satisfactory results. Despite differences in theory, however, most practitioners exercise similar procedures.  These facts suggest that the literal truth of how the magic works is complex and potentially unresolvable. Furthermore, virtually any underlying theory can be treated as valid, as long as necessary performance aspects are observed.

Even so, a concept of how poppet magic works can be a useful guide to how to accomplish the identification process. For the fetish perspective, the operator must attract the intended’s spirit to the working and gain its consent to reside in the poppet for a time. For the astral perspective, a tether or channel between the astral counterparts must be established, also (usually) with consent. For a general magical perspective, an act of will may be enough to establish the necessary dynamic relationship: what happens to the poppet will affect the intended .

Experience shows that the key to making magic work has less to do with what one believes and more to do with how deeply and fully the magical process is engaged. To get to a deep enough level of engagement, the underlying assumptions about the process should make sense to the operator. Therefore, choose or develop a concept for how the poppet becomes identified with the intended, then act accordingly.

Set up a workspace with everything you plan to use, something like this: 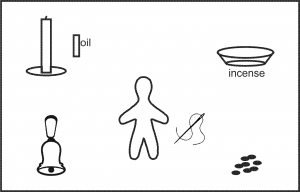 The items shown include:

Set up in a place where you won’t be disturbed.

Note that the charcoal (if used) is likely to still be smoldering, and that necessary precautions should be observed in disposing it.

The poppet is now ready for use. Keep it secret, keep it safe.

A System of Magical Diagnosis and Treatment

The following system is somewhat inspired by acupuncture within the scope of Chinese traditional medicine. In that context, the basic idea is that the patient’s illness is diagnosed as a problem with the flow of one’s vital energy, and the treatment is to redirect energy flow within the body by strategically placing needles into the patient, to establish a more healthy flow. Where the needles are placed in acupuncture is based on a comprehensive meridian map (see here for a sample). It’s worth noting that treating a headache doesn’t necessarily call for needles in the head. In kind, poppet magic meant to heal a heartache after a loss doesn’t’ necessarily call for needles around the heart area.

In poppet magic, the interest is in the magical energy in and around the intended’s life, as opposed to the health-related energy flow within the body. A system of both diagnosing and treating the issue at the magical level can be drawn from Western Astrology, though not exactly the way modern astrologers use it.

The Astrological Map of the Body

Astrological maps of the body vary slightly with respect to internal organs and the connotational considerations. For present purposes, internal organs are not in play, so a basic top-down arrangement will suffice, starting with Aries at the head and ending with Pisces at the feet: 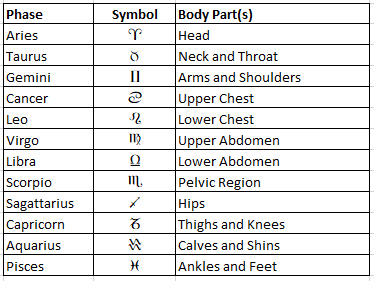 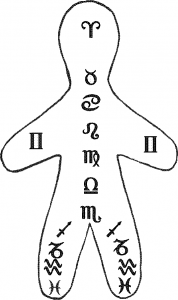 While the overt goal of a magic working in this context may be known, say, a favorable resolution of a court case, the underlying magical dynamics in play are most often occult (hidden). The following system provides a method of divining the occult factors of importance for the given situation, and initiating a magical intervention to put things on a path toward the desired outcome. The  system assumes 12 domains and 7 forces, corresponding to the 12 zodiacal houses and the 7th classical planets. For present purposes, the meanings of the zodiacal phases and planets can be set aside to focus on the mechanics of the system.

The zodiacal domains of the system are represented as a map (as opposed to a wheel): 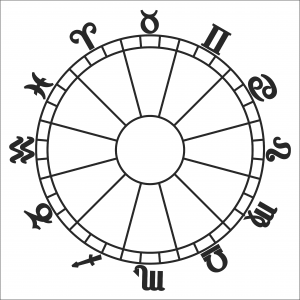 The 7 planetary forces can be represented by colored markers (or dice) according to the following associations: 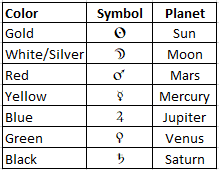 To diagnose the magical dynamics in place, cast the markers or dice over the map and note where the markers fall. The treatment then entails inserting planetary-colored needles into the corresponding zodiacal body parts according to the body map. If a marker or die lands in an unspecified region of the map, the common interpretation is that the corresponding force is not needed for present purposes.

If markers are used, a single needle is to be placed in the zodiacal area indicated. If dice are used, the number facing up indicates how many needles to place into the corresponding body part. In this way, the overall pattern represents a unique balance of forces, brought to bear on the situation of interest in the intended’s life.

Set up a workspace with a candle, some anointing oil, a candle and holder, incense and a burner (optional), the necessary pins, notes needed for their proper placement, a bell, and the linked poppet. Just before beginning, take in a few deep, cleansing breaths and relax.

You can then unceremoniously discard the remaining candle wax, etc. Keep the now-treated poppet in a place where it won’t be disturbed while the magic works.

Dissociating the Poppet from the Intended

While the same linked poppet can technically be used multiple times for different operations, there are some benefits to making any poppet a single-use item. Let inspiration be your guide in that regard. At some point though, there will come a time when you should severe the link between the poppet and the intended.

Use the same sort of ceremonial used for poppet identification. This time you will need to include an incense suitable for exorcism and the means to burn it. At step 7 of the Identification Procedure, take up the poppet and pass it through the incense smoke with the intention of severing the link. Continue till you feel satisfied that the link is broken.

Conclude the ceremony as previously described. You may then unceremoniously discard the poppet. Nothing says “it’s over” better than putting a thing out with the garbage.