The use of reflective surfaces in magic has a deep and varied lore. The earliest form of reflection-magic most likely involved reflective pools of water, then basins and bowls, and of course mirrors when they came along. The lore of mirror magic is well-represented in popular fiction and urban legend to this day. Scrying is typically understood as a form of divination or remote viewing. Other modern applications include past life exploration and spirit communication. This instruction is designed to develop a special form of Black Mirror Scrying, the Facial Reflection-Distortion technique. A sampling of various applications will be detailed elsewhere on this site.

The black mirror facial reflection-distortion technique is derived from literature attributed to Carroll “Poke” Runyon and his affiliate Nelson White.  The two reportedly worked together in the 1960’s and 70’s. The technique was first described in a booklet called Secret Magic Revealed, authored by Nelson White and his Wife Anne. While it’s fair to attribute the modern variants of the technique to Runyon and White’s work, the visual effects at the root of it are quite discoverable by dabbling with mirror magic. It’s a fair bet that many contemporaries have and continue to use the technique without knowing about their work.

What is relatively unique to the Runyon/White/Kraig exposition of the technique was its specific application to Goetic Evocaiton, a type of Medieval magic defined by calling forth and commanding spirits, for self-development and/or to achieve practical goals. The grimoire known as Goetia details the evocation procedures and lists 72 spirits, describing their origins and powers, and a spirit-specific seal by which each may be controlled. An image of the temple layout is also given in several of the source manuscripts, here in cleaned up modern graphics: 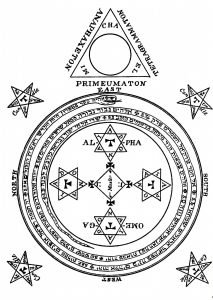 According to the text, the sorcerer would stand in the middle of the circle and call up and constrain the spirit within in the triangle. Runyon posits that the circle shown within the triangle may have represented a mirror, to be used as a scrying device. He further claims support for use of a black mirror because the circle is filled in with a dark pigment in at least one of the Medieval manuscripts.

While speculative and historically unverifiable, it’s a reasonable idea that overcomes some of the problems with speaking out an incantation and expecting a spirit to materialize in the room. In practice, black mirror scrying is a much more reliable method that works for more people than other common techniques associated with the Goetic arts.

Black mirror scrying has proponents and detractors as a tool for Goetic evocation. There is wider acceptance for black mirrors as a general scrying device in the context of most any sort of magic practice. Mirrors are commonly used for divination, in glamour and beauty spells, truth spells (magical spying), and as a means of gaining insight into the underlying factors in play in a complex situation, just to name a few applications. Black mirrors are generally preferred to regular mirrors for magic uses, though many of the same effects can be achieved with regular mirrors given the right kind lighting. Ask the countless slumber party tweens who’ve played the Bloody Mary game.

As a final thought, a black mirror or any sort of magic mirror, doesn’t produce magic of its own accord. Whether a formal technique is studied and practiced, or one learns by trial and error, a learning process is necessary for all but the rare few who come by it naturally. For the rest of us, the following step-by-step method is offered. It was inspired by the works of Runyon & White, and Kraig, and further developed over years of practice.

Black Mirrors and other Equipment

Black mirrors are easily attained in the current marketplace or can be constructed inexpensively. The simplest way to make one is to buy a new or used picture frame with a glass coverlet. While a round mirror has some tradition behind it, the effects that lead to good magic don’t depend on that so it probably isn’t worth obsessing over. Oval frames are common enough. Rectangular frames are ubiquitous, and they work equally well. Size matters too. For the current instruction you want the mirror to comfortably frame your face when placed about an arm’s length or a bit further away, Bigger or smaller than that has proven less than ideal in practice. Importantly, the facial reflection-distortion technique depends on a facial reflection, so a flat mirror is needed, as opposed to a concave mirror, which requires entirely different techniques.

Once acquired, remove the glass and paint one side with several coats of flat black paint. Follow the instructions on using the pant, with the recommended drying time between coats. When the last coat is fully dry, put the glass back into the frame, unpainted side facing forward. Examine the results carefully. What you’re looking for is a uniform glassy black surface. Take care to protect the painting side of the glass. If the paint gets scratched the mirror will show a defect.

Additional Equipment and Set up

You’ll need a place to set or mount the mirror so that you can gave at your facial reflection in it for up to 20 minutes at a session. Some prefer to stand while others prefer to sit. A seated arrangement tends to be the easiest to integrate into modern living spaces but suit yourself. If going with the seated option, be sure you can sit comfortably without moving around too much for up to 20 minutes.

Candles generally produce the most auspicious lighting effects. The key features seem to be dim and variable light that is neither noticeable nor directly-reflected when gazing in the mirror. Runyon promoted the use of hand-held candles for this. If you want to experiment with hand-held candles you can, but consider putting that off until some skill has been developed without them. In practice as long as the main lighting features are satisfied, it doesn’t seem to be a requirement for good results.  Some people even report good results with artificial and steady lighting, as long as it’s quite dime and unobtrusive. For others, magic is always performed in candlelight, and if so, black mirror scrying should be no different: use candlelight.

Experiment with your overall set up to ensure that you can comfortably gaze at your facial reflection in the mirror in the lighting conditions described. Consider it a starting point only. Over time with more experience you’re likely to make changes, Most everyone does.

These instructions describe a training routine, which should be distinguished from performing magic. Practice the training as described till the desired effects are achieved. Using the technique for magic will be covered in another section.

With the room and lighting arranged:

Practice this technique routinely until you get good morphing effects regularly and you feel you’ve gained some mastery. To be sure it’s clear, the above on its own doesn’t make magic. To illustrate, were you to use black mirror scrying for Goetic Evocation, ala vintage Poke Runyon, you’d engage in significant preparation, and perform a well-designed evocation ritual, etc. That’s where the magic comes from. The mirror technique is merely a tool that provides a useful medium for the interaction that a Goetic Evocation is intended to foster.

You’ve find a sampling of applications for black mirror scrying elsewhere on the site.

On Some Relevant Science

A researcher named Giovanni B Caputo authored a paper called the Strange Face in the Mirror Illusion in 2010, describing an experiment with a general sample of adults. Notably for our purposes here, these people weren’t selected for a background in occult studies, magic, or any sort of scrying, nor would that have been a reason for exclusion. The participants gazed into a mirror for 10 minutes and then reported what they saw. Here’s an excerpt of the results:

Those are without a doubt the typical effects described by people who use black mirror scrying with the facial reflection-distortion technique. Caputo has published additional papers, studying different variations and clinical populations, Its worth noting that he uses regular mirrors and doesn’t use candle light, which tend to both facilitate and enhance the effects. It’s also noteworthy that his samples don’t train and try to develop a skillset around it.

These studies reinforce that the mirror effect is a normal, and shouldn’t be considered magic in an of itself. But there’s more. Caputo’s later papers discuss two related perceptual effects that may help explain an important aspect of magic. In addition to the visual effects, many of his participants reported a general sense of otherworldiness about the experience, and some reported feeling detached, as if they were observing the events from afar, or even through someone else’s eyes. If you have practiced magic or even meditation for some number of years, there’s a good chance that it does.

It’s important to note that there are people who have similar experiences constantly and at random times, to a degree where they interfere with normal functioning. In those cases, they’re clinical symptoms and have names: derealization and dissociation. What magic and meditation people experience is nothing like that. In fact, everyone experiences subclinical version of derealization and dissociation at times and it’s not a sign of disorder. Magic and meditation people  probably experience them more often, and that’s not related to any sort of disorder either. There’s no evidence of any kind that magic and meditation leads to any sort of clinical syndrome in otherwise healthy people.

The Caputo studies suggest that black mirror scrying with the facial reflection-distortion technique is likely to be a reliable method of fostering subclinical derealization and dissociation. Given that those states are part and parcel of several magical practices, it’s likely that they contribute in some way to the results of the magic. Having a reliable method for achieving those states could be a game changer for some.